This is a short trip report about a 2-days birding trip from Barcelona on 26th and 27th February, 2016. Early in the morning I picked my costumer, Jon, from his hotel close to the airport. We firstly drove North of Barcelona, to the Sant Llorenç de Munt Natural Park, a medium-size natural park protecting low bushered hills, pine woods and rocky slopes. Here we explored the area around Talamanca, where impressive conglomerate formations are a good winter ground for Wallcreepers. We started to walk the path up, crossing evergreen forests and low scrublands. Some Ravens called around while distant Long-tailed Tits were calling in the forest. We walked directly to an area where I was having a Wallcreeper with other costumers just two days ago. The planning was to arrive to a view point where one Wallcreeper was appearing these weeks early in the morning, sometimes really close. Even far before arriving to this view point qe spotted a favolous Wallcreeper really close in the conglomerate rock. The bird was not really in a cliff but in a huge rock, offering exellent chances for photograph the bird. Jon was really fast in taking his camera and got beautiful shots on the bird in the rock skyline! The bird showed up for some minutes, slowly creeping and looking for invertebrates under the small rocks in the slope and flickering the wings (but not so much). After some minutes the bird just kept walking until it was disappearing to the opposite side of the rock. 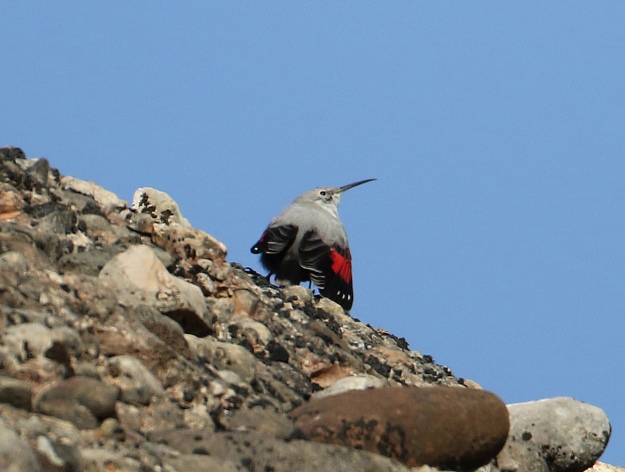 Very happy about this first sight we kept walking up to look for the flock of Alpine Accentors overwintering there. After some minutes looking for the birds we spot a minimum of 14 of them in barren slope. As usual in this species, we enjoyed close views on them, and great shots! We were having a really productive morning so far… The dense undergrowth immediatly around gave us excellent views on Firecrest, Crested Tit, Sardinian Warbler, Blue Tit and Short-toed Treecreeper. Woodlarks were singing around, really active. 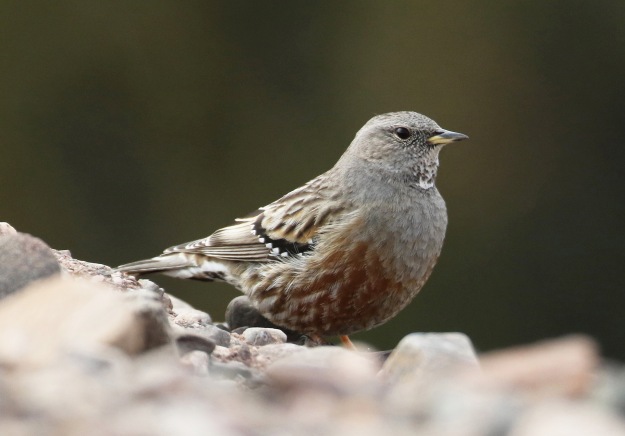 We were back in the car at 11:30 so I drove back to Barcelona. Now it was time to explore the Llobregat Delta, a small but awesome wetland immediatly around the Barcelona International Airport facilities. It was 12:30 when we get inside the Natural Reserve, expecting to have some good birds (and lunch) inside the hides. We were directly going to one of the hides where a male Moustached Warbler had been showing really well the last two weeks. After a pair of minutes scanning the reeds, we listened the calls of a Moustached and immediatly after that the warbler was appearing and started to sing. The bird was showing in a small patch of reeds showing extremelly well and being really territorial against any other birds moving in the reed; Chiffchaff, Great Tit & Reed Bunting were all chased by the warbler. A Cetti’s Warbler moving in the area ( and showing well) was surprisingly not disturbed by the Moustached. 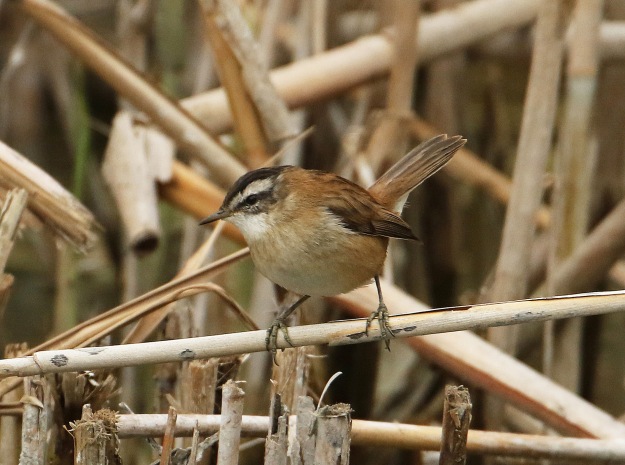 Moustached Warbler (Acrocephalus melanopogon) is probably one of the most tricky warblers in Europe.We enjoyed go-away views on the bird! Image by Jonathan Mercer

Well, the visit to the wetland was already a success but this was only the beginning! Just beside the patch of reeds where the Moustached Warbler was still singing and preening quite high in the reeds a Bluethroat was briefly showing in previous days so I invested some time checking this tiny spot expecting to have a Bluethroat. And we were again lucky because a wonderful male Bluethroat came out of the vegetation and showed out very well, but briefly. Other species appearing in this hide included Green Sandpiper, Common Pochard, Common Teal, Marsh Harrier, Little Egret, Shoveler, Little Grebe and Water Pipit. We then tried the second hide, which provided an excellent combination of waterfowl. An amazing combination of birds at close range that included 12 Greater Flamingoes, 2 Spoonbills (1 adult + 1 immature), 1 Glossy Ibis in summer plumage and 2 drake Garganeis! Some other really good birds were present as well. A minimum of 5 Purple Swamphens were out of the reeds, 2 Ruff were feeding on the marsh along with 2 Dunlin. Several Common Snipes were testing the mud looking for food while a pair Water Pipits walked around in the shallow water. In one of the islands in the marsh a Golden Plover and Northern Lapwing mixed flock was roosting. A good variety of ducks was also noticed, this time including also Shelduck and Eurasian Wigeon. In the mud, 2 Little Ringed Plovers ran up and down, the first of the year! Up in the air, a big flock of swallows was flying over the marsh. Crag Martin was the most common but we also counted at least 7 House Martins, some Barn Swallows and at least 2 Sand Martins, not bad! A pair of Kingfishers crossed in front the hide, but didn’t stop. In the reeds, another Moustached Warbler was singing but unfortunately didn’t show at all. 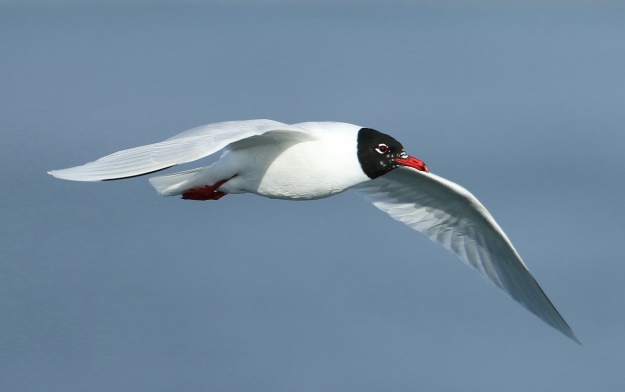 Thousands of crake Mediterranean Gulls (Larus melanocephalus) like this one were showing during the weekend. Image by Jonathan Mercer

It had been a wonderful trip so far, but it was time to drive down to Ebro Delta. Our time in Llobregat Delta was longer than expected (because of the excellent birding there) but we still had time to spot a pair of interesting birds at Ebro Delta. As normally happening in Ebro Delta, birds were appearing just arriving. Cattle Egrets, Common Sandpipers and Kingfishers were everywhere. We did a first spot to check the Ebro Delta northern bay. There we enjoyed a huge flock of thousands of Mediterranean Gulls, many of them showing their lovely breeding plomage. On the sea we could see our first Balearic Shearwaters, being a good start for what it have to come the next day. About 20 Black-necked Grebe were in the bay along with several Great Crested Grebe and, among them, 1 Slavonian Grebe! a rather rare bird that South. Soon after Jon spotted 1 Razorbill, another good bonus!!! We then moved to a new location not far from there. Here we fast recorded a good number of waders: Greenshank, Curlew, Common Redshank, Common Ringed Plover, Sanderling, Bar-tailed Godwit, Grey Plover and even 2 Little Stints in only 10 minutes. Along with them in the shallow salt water there were various Slender-billed Gull and a good number of LBB Gull. Flocks of Glossy Ibises were flying over us going towards their roosting place while Greater Flamingoes (hundreds) were feeding around. Despite the poor light we still spent ten minutes in a fresh water lagoon, expecting to have a Greater Bittern flying over the reeds. Unfortunately no Bittern was appearing but tens of Purple Swamphens were seen (and heard) appearing from the reeds. In the edge of the water, really close, a pair of Bluethoats were calling and we enjoyed really close views of a female moving by the edge of the water. A wonderful end for an awesome day! When getting inside the car we still listened a distant Moustached Warbleer singing in the reeds…

The next morning we left Ebro Delta quite early in the morning. We had to be in Tarragona harbour at 9:00 in the morning since the sea trip run by GEPEC was leaving at this time. Unfortunately we had no time to enjoy a bit more the huge variety of birds living in Ebro Delta; next time! 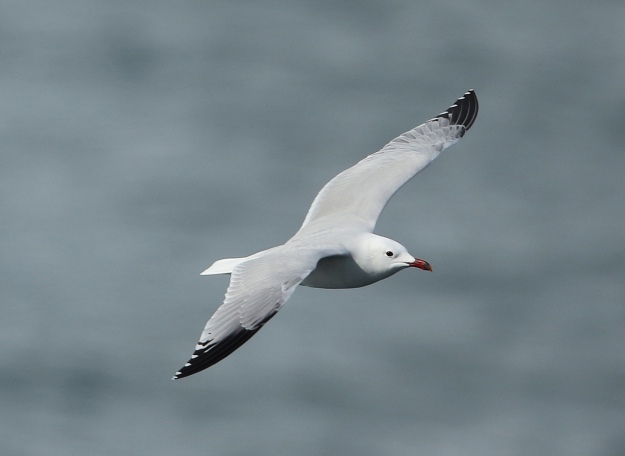 Once out of the harbour we soon spotted some beautiful Audouin’s Gulls along with several Lesser Black-backed Gulls (intermedia and graellsi races) as well as many Black-headed Gulls. At least 4 Atlantic Gannets were also appearing (showing a good variety of plomages, by the way!). It was not long until we saw the first of many Balearic Shearwaters flying around or flying in the back of the boat along with the tens of gulls that were following us. After some minutes we had our first Skua. A Parasitic Jaeger (dark form) that showed well but shortly in our side of the boat. Soon after a Great Skua was also showing really well, attacking Mediterranean or Audouin’s Gulls. The flocks of Balearic Shearwaters flying around the boat were also producing at least a pair of the more scarce Yelkouan Shearwaters! Also a really good bird. 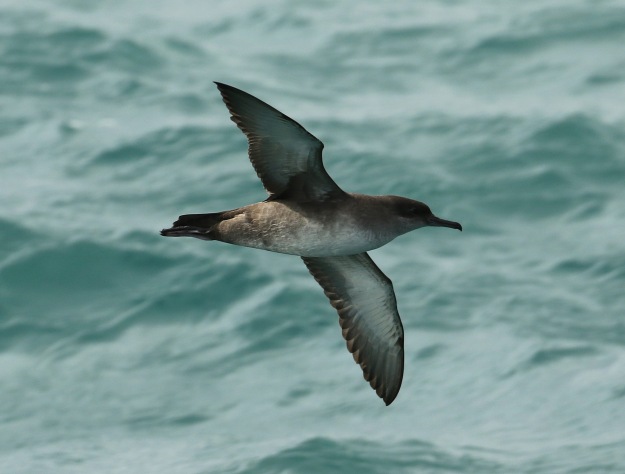 The last part of trip was probably the best as we still enjoyed gorgeous views on all good birds plus a wonderful Pomarine Skua, a really scarce bird during winter in Catalonia (thought we already had one in January on one of our trips!). Along with the Pomarine, at least another two Great Skuas were also showing well and had really good “bonxie” fights!! 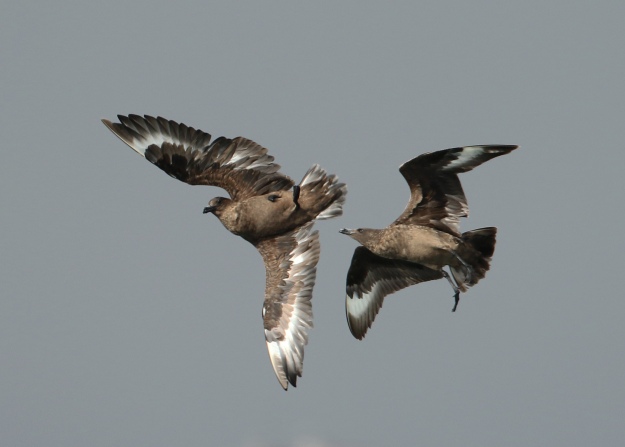 We still invested some time scanning for scarce species or early arrivals (thinking about Scolopi’s Shearwater or Mediterranean Storm Petrel). No any good bird was appearing but we were enthusiastic after a wonderful sea trip.  Not easy to have three species of Skuas in the Med, thought!! After having lunch we just enjoyed a pair of hours of birding in the Llobregat Delta, where we were having mostly the same species that we already had the day before. Well, two really close, summer plomaged, Black-tailed Godwits were also a good bonus A pair of minutes of car were invested to arrive to the airport…. and was the end of a wonderful 2-days trip!!!! 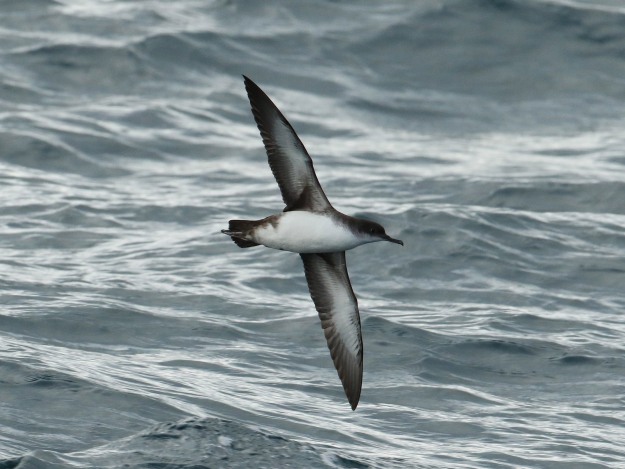 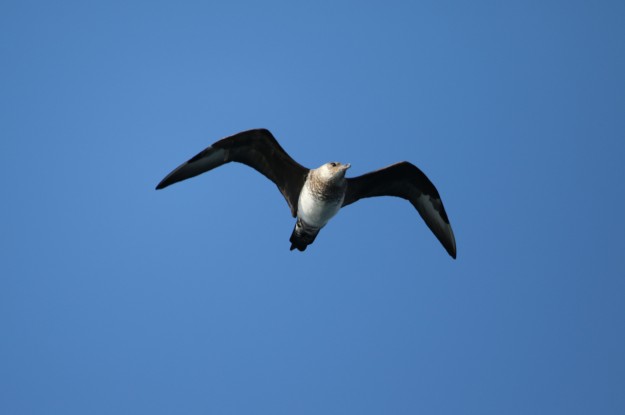 This gorgeous Pomarine Skua (Stercorarius pomarinus) was a good bonus in the sea trip, being a rare winter bird in Catalonia. Image by Jonathan Mercer

Just want to thank Jon for sharing some of the many, many excellent shots we had during the weekend! 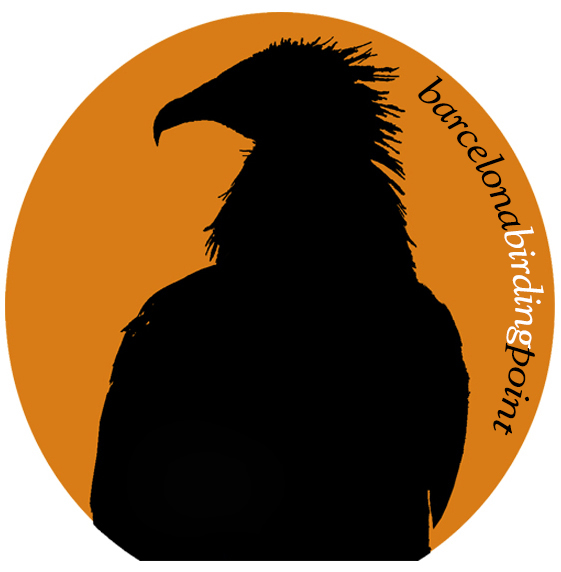