On Sunday July 24th were ringed 400 chicks of Flamingo (Phoenicopterus ruber) in Ebro Delta. This is the sixth summer that chicks of Flamingo are ringed in this Natural Park. About 200 people participated in an operation that started at 4:00 am and ended about 10:00 am. The chicks were ringed with a PVC ring in its right leg and with a metallic ring in its left one. After this they were brought to be weigh and finally they were retorned to the salt marshes.

In Ebro Delta the numbers of Flamingo have been increasing for years, since in early 80’s there were about 50 and more than 11.000 have 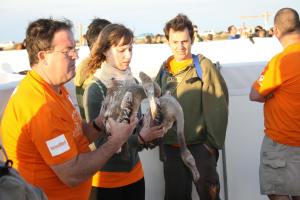 are about 3.000 pairs breeding in Ebro Delta.