One adult Rüppell’s Vulture (Gyps rueppelli) was recorded in Serra del Boumort during one of Barcelona Birding Point birding tours through Catalan Pyrenees. It was on 16th June, 12:35 am in an outdoor scanning of the massive cliffs and gorges beside Pessonada tiny village. 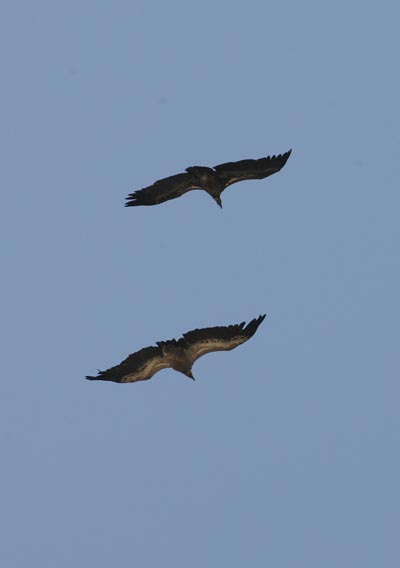 Birdwatchers were Joe McCulloch, Ray Milton (from England) and Carles Oliver (local guide). That day we spent the morning looking for some small birds in the low garrigas aroung the cliffs and rocky slopes of the Boumort. We were quite successful as we got nice sights on Subalpine, Dartford and Western Orphean Warblers, Woodchat and Red-backed Shrikes and Wryneck as most renamed. During those firsts hours we already saw some Griffon Vultures as well as one Egyptian Vulture flying over the big plain that straights immediatly South of the cliffs.

As the sun was getting strong we decided to move closer to the cliffs, being a small church beside them an excellent view point over both the cliffs and the plain around. There were Griffon Vulture small flocks constantly flying over our heads. We arrived to the view point around 11:40 and around noon we enjoyed a great sight of Cinereous Vulture (Aegypius monachus), a really old individual, typical long winged and short-tailed.

At 12:35 a small flock of seven vultures were coming to us quite low. The first vulture of all of them immediatly call our eyes as it appeared as being clearly darker than all birds around it. When passing over our heads we could see some evident characters; white collar feather, black underwings, light bill and (sparse) white dropped body. We fastly agreed that we were having a Rüppell’s Vulture over us. The bird was flying quite fast over our heads and was following the rest of the flock until it was about 400 metres from us. It was a nice chance to see the smaller Rüppell’s flying beside some Griffons. All the flock fastly won altitude and, flying to West, desappeared behind one slope.

The plumage characters of this individual indicates that it is a young adult as drops in belly were scarce and we only saw two secondaries moulting. During the winter of 2011 a supposed juvenile Rüppell’s Vulture was photographed in one of the Supplementary Vulture Feeding Station in Boumort. It was a long and interesting controversial as it is really difficult to differentiate juveniles of both species (especially on ground) and no quorum was achieved.

Personally, I cannot say the bird we saw in 2013 is the same vulture of the image in 2011. What it seems clear is that Rüppell’s Vulture is already flying over some areas of Catalan Pyrenees. This African species is already nesting in really few numbers in South Spain and it seems probable that some of them could look for new territories Northwards.

By the way, I have to point that this day we went back to our hotel after having sights on five species of vulture!! The last to appear was the magnificent Lammergeier (Gypaetos barbatus) and thus we had an excellent day watching all the species of vultures that you can see in Europe in the wild!!